Monster Invention is the twenty-second episode of Season 1 of Robot and Monster.

When Monster's head-scratching invention turns into an overnight success, Robot becomes determined to invent something even more successful.

Loudmouth: You know what I'd enjoy? Sewing your mouth shut with a steel cable! (laughs hysterically as others join in)

Robot: Well, how would you like it if i beat you at what you were best at?!

Monster: Why, I would be happy right now! I would be celebrating with hats and cake and...

Robot: Well, I don't feel that way! I've been inventing my whole life, and you just stuck a fork on a stick! It's not fair!

Monster: Huh... I guess that explains the lack of hats and cake.

Nessie: (angry) You know I'm still single! Get out, you backstabbing Harpy! (throws plate of bacon at her) 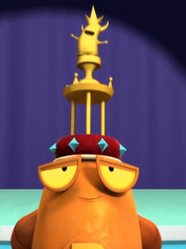