View source
watch 01:36
We're Getting Mutants in the MCU - The Loop
Do you like this video?
Play Sound

Ogo's Birthday is the twentieth episode of Season 1 of Robot and Monster.

(in order to get tickets to go to the Sewage Plant)

Robot: You want me to clean the furnace?!

Gart: Well, it's not going to clean itself. Well, it would, but I'd have to press a button that's way over there. (pointing toward button panel right next to him)

Monster: Time to go to the Sewage Plant tour!

(J.D. and Spitfire roll by)

Spitfire: You guys are going on a tour of the Sewage Plant?

Spitfire: Ogo's birthday party? (laughs) I don't know anybody who'd be caught dead at that creepfest!

Robot: (contemplates with slight guilt as J.D. and Spitfire zoom off)

Monster: You know what? I'm not sure I still want to be your friend! (storms off)

Robot: (feeling slightly elated and smirks at Ogo) What are you going to do? (follows after Monster) I know it wasn't easy...(to Monster), but you said what you needed to. I'm proud of you, Monster. (looks over to see him gone) Monster?

Monster: I'm so sorry! I want to be your friend again! Please forgive me!

Robot: (fuming in disbelief...then whacks self with pinata stick)

(at the Sewage Plant once again, bringing along Ogo)

Ogo: (sits beside Robot) I hope you don't mind if I ride by you. If I sit by myself on these rides, I throw up. Sometimes, I throw up anyway. (vomits)

Ogo: Sorry about that! (vomits again) And that too! 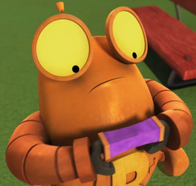 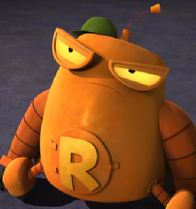