Security Risk is the nineteenth episode of Season 1 of Robot and Monster. It debuted on Saturday, August 25, 2012.

After Robot and Monster's apartment gets robbed, Robot decides to invent a security system that is "100% safe" though it ends up being more than he expected.

Mr. Wheelie hears Marf marfing in the middle of the night and comes in Robot's apartment to investigate. Robot quickly dismisses it as Monster sneezing, and he leaves. The next morning, Robot wakes up to discover that the bed has been replaced by cinderblocks and everything they own is gone, including Robot's R and Monster's pants. This causes Robot and Monster to freak out.

8 months later, everything they own has been replaced with an exact duplicate. Robot becomes paranoid about more burglars and builds a very complicated security system which involves fingerprint and eye scanning, voice detection and dodging laser beams. Monster feels that the solution is to appreciate what they have before it is gone. Just then, Ogo comes into their apartment but is promptly sliced into pieces by the lasers.

Later, Monster wants to go out but Robot is paranoid about the safety of the outdoors and builds a hovering indestructible glass case, which causes a lot of destruction in the town. Later, they decide to go to the Makin' Bacon but Robot cannot eat whilst in the glass case, so he builds a security droid called K. I. L. L. B. O. T., which causes havoc in the restaurant. Monster stays at the restaurant overnight to appreciate his bacon.

At home, Robot is annoyed by Monster taking 4 hours to use the bathroom in order to appreciate the toilet paper, so he decides to find a middle ground. He then persuades Monster to get rid of some furniture. However, this causes Killbot to go berserk because of objects leaving the home. They hide in the glass case but just then Mr. Wheelie comes in and mistakes Killbot as their pet and battles with Killbot, destroying him in the end. Just as he is about to leave, he heard Marf marfing, so he said "Gesundheit" to Monster, and then he leaves only to be sliced to pieces by the lasers.

Robot: (stares at him in confusion)

Monster: Robot, calm down. The important thing is we're safe.

Robot: SAFE?! If they took my R, they can take anything!

Monster: They can't take our dignity!

Robot: Well, they took your pants.

Monster: (looks down to realize he is naked) GAH!

Monster: Ooh! How does it work?

Robot: It's simple! Here, look at these instructions. (places blueprints on table) Just use your fingerprint to activate the eye scanner, scan your eyes to activate the microphone, sing a high C to activate the keypad, enter the 52-digit passcode, then duck your head and jump at the same time to dodge the laser-swords.

Monster: What if you make a mistake?

(loud beeping occurs, followed by the sound of crashing and laser-swords as Ogo screams)

Ogo: (parts scattered on the floor) Don't worry, I'm fine, I just need a hand. Get it? (laughs) I was saving that joke for when my arms get cut off, so today's my lucky day! 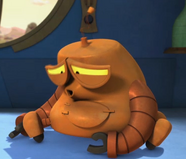